Skip to content
I got Blogger to turn back into English. Thank heaven. It involved several lucky clicks, turning the language to Russian, then turning it back to English.

I mean, I’m still logged into my Google account, so why does it change the language based on my geographic location? YOU KNOW MY WHOLE LIFE, GOOGLE. LET’S JUST KEEP EVERYTHING ENGLISH, OK???

When I found out I was going to Taiwan this July, I told a friend who had served her mission in Taiwan. She said (of course), “You’ll love it!!” But also, “It’s the hottest time of the year. It’s super hot and humid.”

I’d never visited a tropical climate before and I’ve only lived in California, Utah, and Russia, so saying that something was”humid” didn’t really have any meaning for me.

Well, when I stepped out of the airport in Taipei and really experienced humidity for the first time, there are no words to express what I felt. The closest I can come to explaining it is waving my hands in front of my face with my tongue out. It’s like being in a badly ventilated male dorm room. It’s not a good feeling at first. Or ever.

But you can get used to it.

At first, all I could do was shake my hands and stick my tongue out to deal with the humidity (it didn’t help), but over these past couple days, I’ve grown accustomed to it. Thankfully, God invented houses and those sacred edifices keep that stale air outside away. Also, air conditioning is a big plus. But your body just gets used to to it. At least my skin’s not dry!! (#Utah)

The humidity isn’t the only new thing.

Since I’m in a tropical climate and it’s July, that means a bunch of typhoons are headed this direction. A typhoon is a hurricane except Asian (but NOT in a racist way). Again, being from California/Utah, hurricanes/typhoons aren’t really a thing I know about. The only time I hear about hurricanes or typhoons is when they’ve flooded entire cities or have sharks flying around in them,

So when, on my first day here, my Taiwan boss lady announced, “Today is typhoon day!” like it’s just laundry day or time to clean the fridge, I’m like, “So I SHOULDN’T be wearing a life jacket just in case?”

Typhoons are just very rainy and windy storms (duh), but as long as you’re away from the ocean, you should be able to avoid any sharknadoes or flooding. For this last typhoon, we were in a sweet spot where we only got a lot of rain and a little wind. So I guess that typhoons can be fun even if they aren’t deadly.
So Taiwan’s fun! Lots of new stuff, but none of it has killed me. So now what?

Pics from my morning runs: 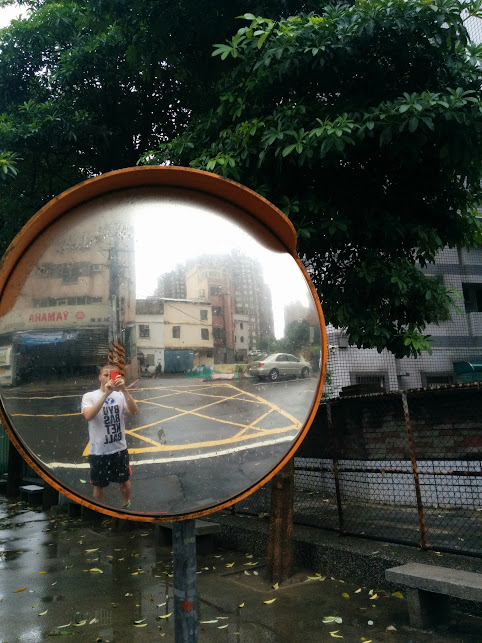 Stuff I write about